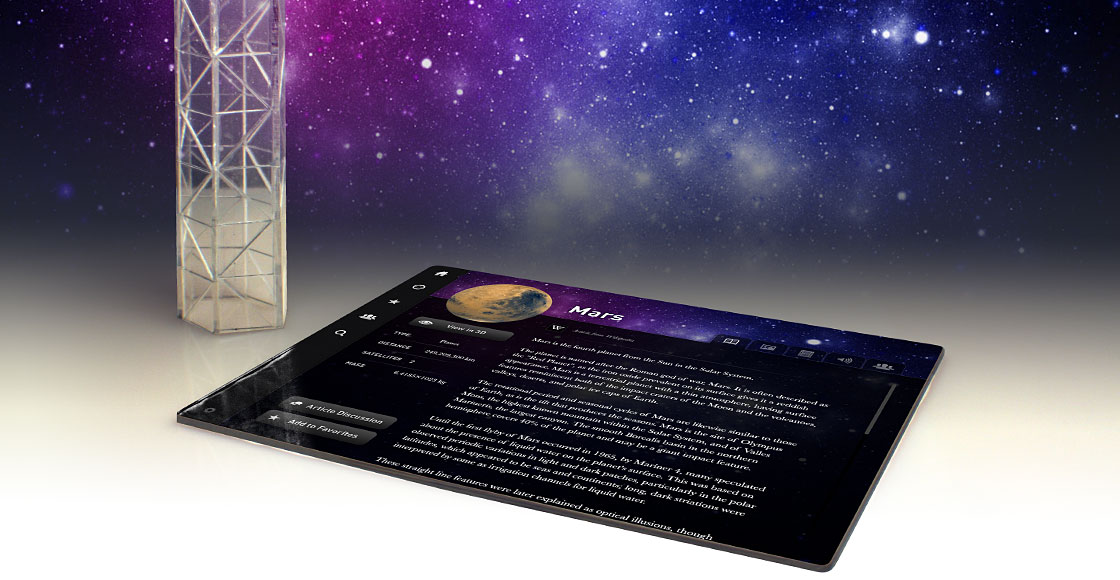 Exploring the future of non-fiction books, we created a multiple-device ebook for amateur astronomers to aid personal information exploration and community sharing.

Students will form teams of three, designing an interactive, media-rich, non-fiction “book”. In addition to the digital interactions, groups should consider the physical, tangible form-factor and interactions of the book, which must include the use of multiple devices at once.

This project was developed in collaboration with Geoffery Ka’alani, Jojo Chongjaroenjai and Katie Miyake.

My chief roles for the project were in the design of the interface and the development of the Flash interface prototype for the iPad.

Based on our research, we focussed on the concept of communal exploration of the night sky. Gazing through a telescope has traditionally been a solitary activity. Through the incorporation of three-dimensional projection, Sky Guide allows participants to interact with the device, as well as engage with others.

After a number of iterations and changes, we settled on a more refined interface. There were numerous small details we had to account for, including larger hit areas for the touch interface and a clearer primary navigation.

Skyguide is composed of two devices, one being the Augmented Reality Scope, and the other being the 3D-Enabled Tablet.

The Augmented Reality Scope acts as a powerful handheld telescope, used to scan the night sky for any celestial body while locating its coordinates, take high-definition photographs and communicate with the Tablet to allow more in-depth exploration of a subject.

The 3D-Enabled Tablet allows the user to explore the cosmos in both two- and three-dimensions. It also serves as the media-viewer and archive for information, and well as a networking hub for connection to the astronomy community.

Visit the Sky Guide website to find out more about the prototypes.

I learned a lot during the project: about the dynamics of working with a team and collectively moving forward in a productive manner; about project scope and refining features towards simplicity; about designing for touch interfaces; and about exploring new techniques and systems to create a space where users can make their own meaning.

In terms of skills, it’s been a number of years since I last used Flash, so I learnt a lot from engaging with it again, particularly never having used Actionscript 3 before. Learning about the process involved in provisioning and testing on the iOS platform is something which I feel may be useful in future projects, as well as the techniques I learnt for optimizing Flash for the iOS environment.

As a team, it took us quite a bit of time to really refine the direction for the project. If I was to approach this project again, I would like to push it further into the realm of the speculative; work harder on creating interactions that would allow more room for users to create their own information structures; and spend more time focussing on the interactions beyond touch—exploring the affordances of a 3D interface.