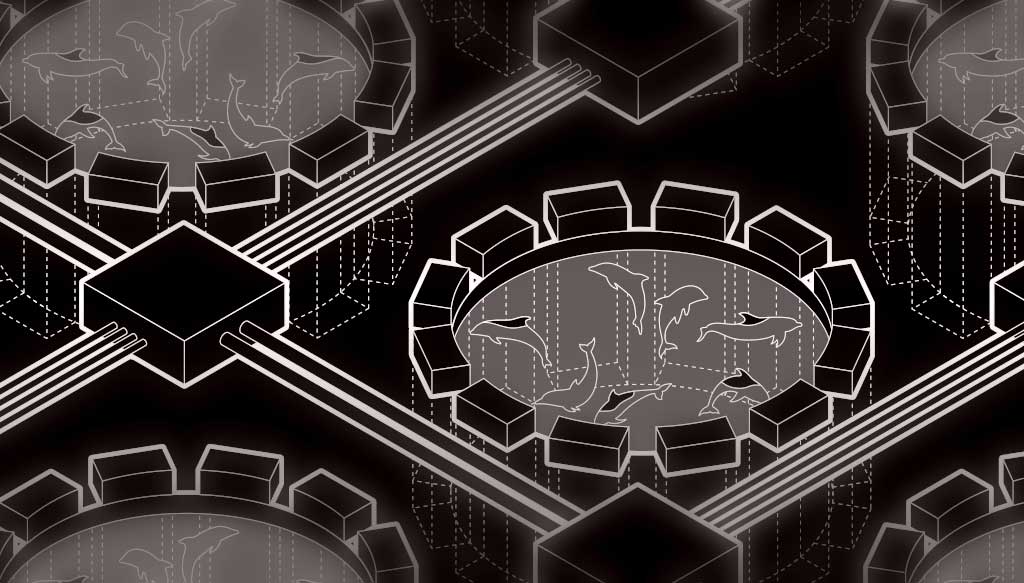 The future of an alternate reality without computational logic processing

In this alternate reality, where computers cannot process logic, what do the companies that supply human logic processing look like? And what might future innovations of such logic processing be?

Manufacture an artifact or create a scale model of a tangible environment or component which is a result of, or part of, or is directly inspired by, the context you developed in Project 2 of Computation and Materiality.

A video of my final presentation for this project

This project builds on the alternate reality I created in my User Logic experiments. In this alternate reality, computing also has incredible power to store, retrieve and archive, but cannot process logic. Instead computers rely on a global network of human users for logic processing.

For this project I started to imagine and design the artifacts of this world. What might the hierarchies, schematics and buildings of the companies that supply human logic processing look like? What might future ‘technological’ developments of user-based logic processing be?

Starting to think about the businesses and structures of this reality, I designed the logic processing plant of a company which supplies logic responses to a global network of computers. This one center would be one of many operated by a company and could handle a full breadth of possible requests. Each level within the building becomes more ‘abstracted’. 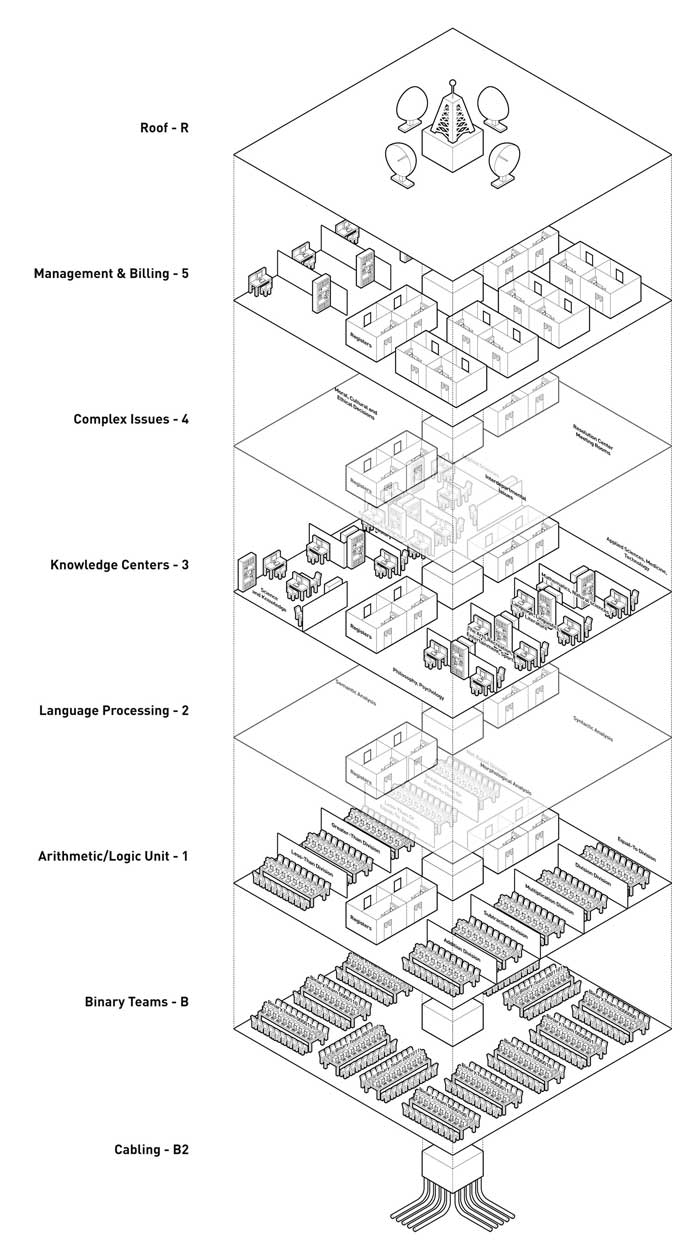 From below the basement, fiber optics bring all logic queries into the building.

The Binary Teams are located in the basement. Each machine just has two keys as the responses are only ever 1 and 0. Requests might be coming directly from computers or from further up in the building.

The third floor contains Knowledge Centers for each of the main fields of study (the diagram uses the main groups from the Universal Decimal Classification system, which are assigned floor space by the relative number of Wikipedia articles).

Management and Billing fill floor five, while satellite dishes on the roof allow for alternative forms of communication with the network of computers sending logic requests.

Having reviewed the first draft of the human logic processing plant, it seemed that a number of floors weren’t really necessary. Computers still function in the same way, only the logic processing elements need to be replaced by the person. Ultimately every computation is processed in low-level binary.

This led to a redesign of the processing plant which removed these excess floors and scaled each floor by its need relative to the floor above. 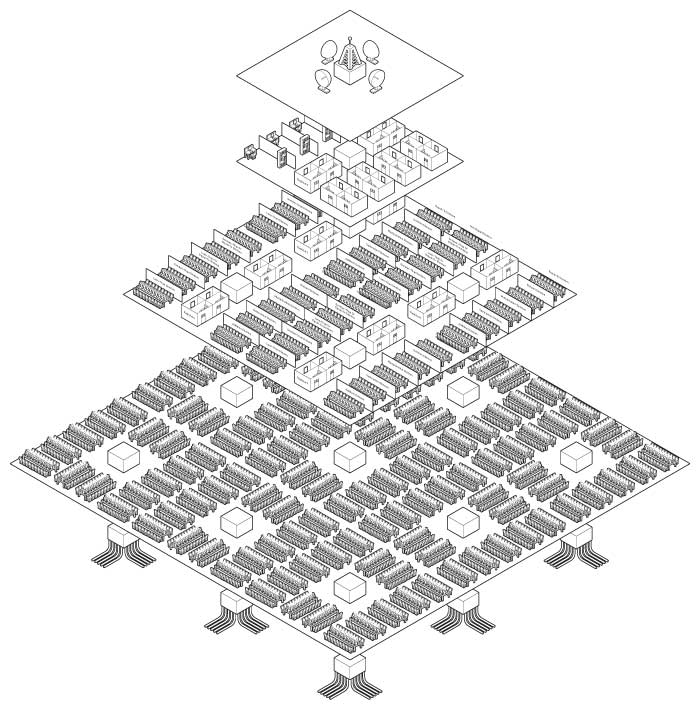 Having taken the schematic diagrams to this point, it seemed that there wasn’t much further to be learnt from them without entirely reproducing a computer in building-form. Instead I began to imagine what might happen as competition arises, the industry looks to save costs and increase efficiency, and innovations occur.

I imagined that at some stage someone might explore training animals to process logic. (My research led me to a large number of real experiments and scientific studies in this area!) Using reward-training, at first someone trains chickens to respond to these binary requests. They are not as reliable, but much cheaper than humans and humans can be hired to check a percentage of the chicken output. A number of years later, someone begins working with dolphins and within a short period of time dolphin logic-farms begin to emerge.

For the next stage of the project, I took these ideas and designed a diagram of one such dolphin logic-farm. 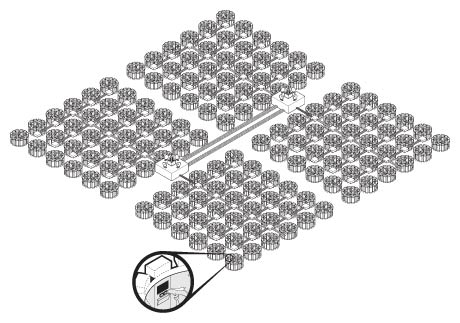 The evolution of non-computational logic processing 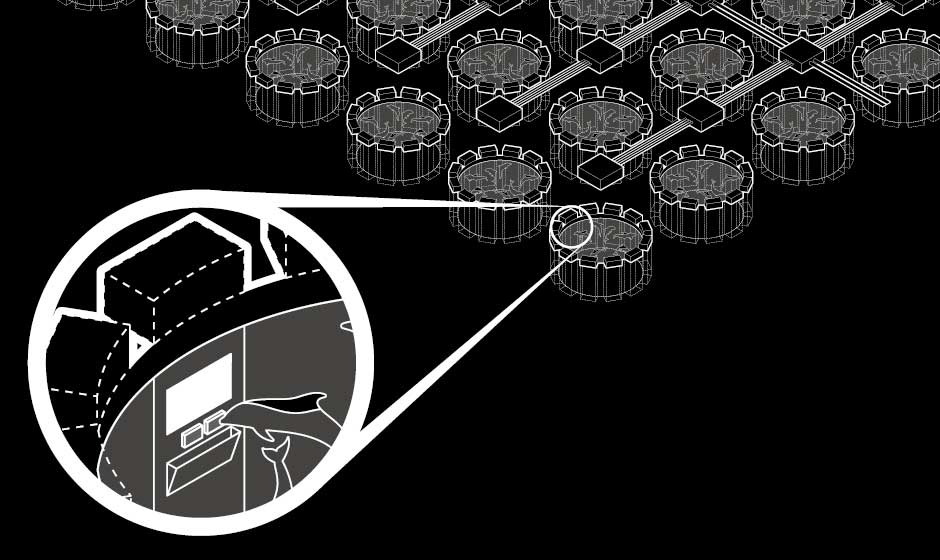 Thinking about the differing levels of error in each of theses logic processing methods, I did some reading on Bit Error Rates and began to speculate on the different error rates of each of these ‘technologies’.

I created a simple Processing app for simulating human logic processing. I asked a number of volunteers to perform 100 binary calculations as fast and as accurately as possible.

Taking these experiment results as well as speculating error rates for chickens and dolphins, I imagined how these ‘technologies’ might be combined to created new logic processing structures within existing company hierarchies. Large numbers of requests can be processed cheaply by chickens, but dolphins act as a mid-level quality control system which is further checked by humans within the overall structure of the business providing this service.

This project has really informed my design methodology, a new way of working which I had been using elsewhere but that I was really able to define through the explorations of this project. The project moved from my initial materials explorations to a design fiction to a coded sketch. This then became a diagram which lead to another experiment which again informed a further diagram.

This moving between modes of making or formats, which I was introduced to in the Authoring Critical Media Structures project, has really become an important part of my work and I think will serve me well next year particularly during the initial phase of my thesis research. Having written about and been inspired by Rosenberg’s model of creative research, I feel that I am finally beginning to define for myself a methodology which moves between the centripetal and the centrifugal.

The project has also allowed me to explore new methods for distorting and recontextualizing code structures and their relationship with human interactions and routines. There are a variety of questions that this project has left me with which will feed into my thesis research. How does the human-computer relationship shift when code procedures become routines performed by a person? What distinctions do we make between the quality or character of machine error in contrast to human error? And how do these distinctions blur as code/user roles are inverted?