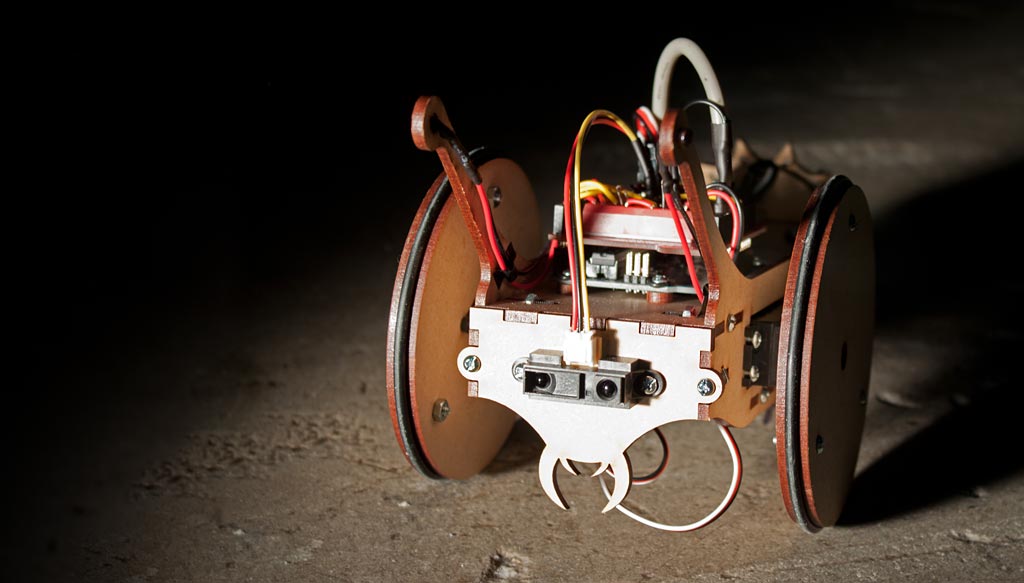 An animistic ecology of bioluminescent creatures that feed off bioluminescent algae. Emergent behavior from simple robots and a reactive environment, both programmed with basic logic.

The brief for the project is to create experimental systems that accept and leverage the human tendency towards animism, thereby creating new modes of interaction and communication. Your New Ecology of Things (NET) project should rethink how systems and people interact by designing behaviors and applying the ideas of NET, including productive, embodied, and mythological interaction. The project must incorporate some kind of distributed computation, where there are multiple, interactive objects and/or spaces and the interaction of the multiple systems define the project.

Browse my blog posts following the development of this project, or view the code on GitHub

To kick off this project for New Ecology of Things, we researched and presented “interesting examples of animism” alongside some initial ideas for our project.

The animistic references I presented were:

Read more about the initial presentation in this blog post.

The key question I took away from these initial inspirations was what a physical object that feeds off our online presence might be like. A dæmon that is a manifestation of a person’s virtual ‘soul’ and that constantly follows them as a ‘background process’? Building on these initial ideas, I started to map out a network of animate elements which exist in a fictional shadowland where the digital and the physical worlds overlap. Each person would have a dæmon which would follow them around, feeding off a network of smaller plant-like objects, which in turn feed off the person’s digital activities or data shadow.

It seemed that this system needed some additional complexity for the user. The diagram above just showed one point of interaction for the person. Looking for an additional model to build this interaction upon, I imagined the devices as a robotic personification of the three parts of the psychic apparatus defined in Sigmund Freud’s structural model of the psyche: the Id, Ego and Super-ego. Read more about my presentation of this concept in this blog post.

I started developing some basic robots for the Id and Ego elements and it was then that animism started to emerge.

I started some experiments with a Kinect, thinking that it might be interesting to physicalize its affordances (of recognizing and tracking users) as the ego device in my system.

I designed the ‘Id’ device to run off two servos. Referencing Freud’s Id, I designed it with a simple, instinctual logic that sought out stimulation in a highly energetic manner. As I developed it from the preprogrammed movements in the video above to having a basic light-seeking logic, it began to really come alive—displaying a number of animistic behaviors.

Initial tests with the light-seeking robot seemed to yield much more animism than the previous experiments.

At this stage I decided that I was having much more success with this new robot, and I was realizing that the Freudian concept was overly complex for this application. I chose to drop this initial concept and just see where the new robot’s animism might take me.

In my final presentation, I outlined a fiction where miners in southern France had recently discovered the world’s deepest cave and the habitat of an entirely undiscovered ecosystem.

Small bioluminescent creatures, now referred to as biolumanoids, were the most complex of the creatures discovered. They appear to be related to both the insect and mole families, but have evolved as a silicon-based life form. They have bioluminescent rears which seem to serve both to attract mates and communicate among the herd.

These biolumanoids spend the majority of their lives foraging food which is in limited supply this deep within the earth. They feed off bioluminescent algae which bloom near the mineral vents in the cave. Should they stray far from the vents, and consume all their energy in a hunt for food elsewhere, they have been observed to enter a hibernation-like state by which they conserve any remaining energy. 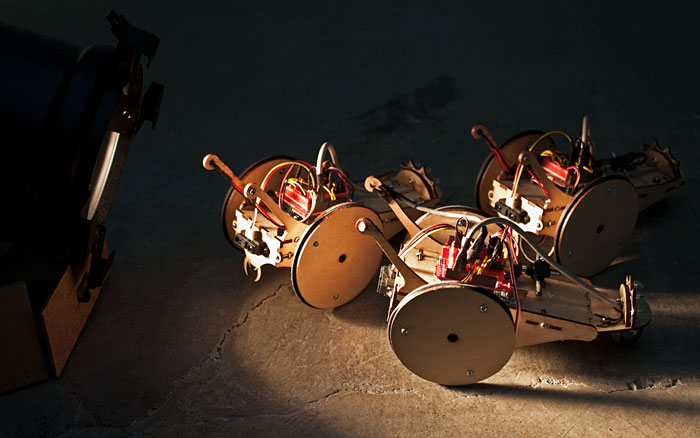 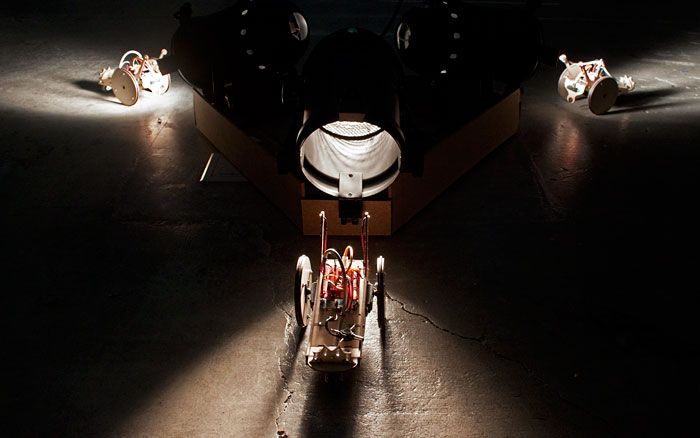 The concept for this project went through a lot of changes. Ultimately, the final project came out of observing animism in one aspect of an earlier concept, then dropping the rest and just focussing on refining that. This form of research through making which can end up taking you in wildly different directions is something new to me since beginning Grad Media Design but is something which I’m learning to integrate into my practice.

That said, I don’t think my final framing was hugely successful. Through pursuing a story and setting in the wrong way, the final presentation was more like something experienced in a Science Museum than an interaction which inspires critical reexamination of our relationship with computing. Telling a good story is more about creating an experience people engage with or relate to, than necessarily creating a traditional fiction. Ensuring my voice or point-of-view comes through in my work is something I need to focus on next year. I am learning how important the final framing or pitch is too, and that every decision can be read as having intention whether you made it consciously or not.

I have learnt a huge amount technically during this project and the New Ecology of Things class, having never used Arduinos or electronics to this degree before beginning grad school. I am really excited by the possibilities for creating functional prototypes through simple electronics and coding, and this is definitely something I will be taking forward into my thesis work.