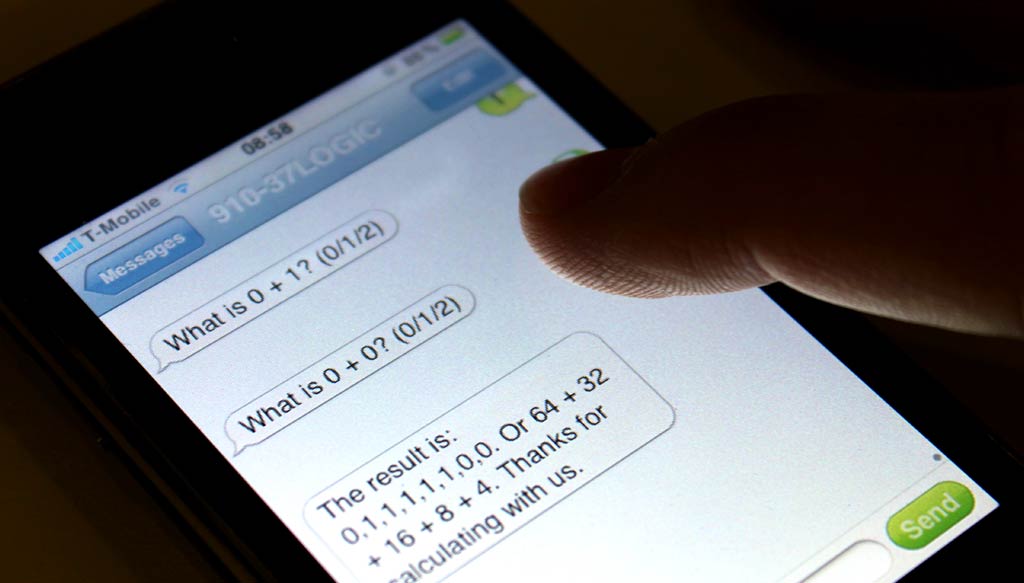 In this alternate reality, computing also has incredible power to store, retrieve and archive, but cannot process logic. Instead computers rely on a global network of human users for logic processing.

This brief entitled “Computational Futures” encouraged us to explore hypothetical situations that challenge existing forms of and relationships between computation and the material world around us.

Using experiments as a foundation to extrapolate, we explored what situations could materialize if some of our computational systems are expanded, amplified and played out to a radical conclusion.

This project was explored in tandem with my Physical Pixels project.

Building on some of the initial procedural logic experiments we had undertaken in a class workshop, I followed an experiment-lead line of enquiry which eventually lead to my Alternative Logic Futures project.

The enquiry began from an initial idea I’d sketched for logic as therapy:

This initial slide for a logic experiment as therapy lead to my speculations and investigations in this project.

From the first quick sketch, I started to create some ‘phone tree’ helplines using Twilio.

The first of these was an ultimate helpline which would aim to help you with any problem through an automated phone system which lead you through a near-endless series of options.

Modifying this idea a little further, I imaged a system by which computers could leave queries for users which they couldn’t answer computationally. Users would check their ‘machine query inbox’ and could help computers with complex moral questions, aesthetic judgements or describe sensory experiences.

View the code for these experiments on GitHub→

This last experiment lead me to imagining an alternate reality where computing also has incredible power to store, retrieve and archive, but cannot process logic. Instead computers rely on a global network of human users for logic processing.

I illustrated this by creating an SMS-based calculator. You send it a mathematical query and it solves the equation like any digital calculator, except that at every step which requires logic processing it must send the logic statement back to the user to be answered. The process sees the user helping the machine to convert both numbers to binary and then to add each of the binary elements together.

To frame the software sketch above and explore a new methodology which might be useful in thesis year, for my Media History and Theory class I wrote a design fiction based on this alternate reality I had created. It was an interesting way to explore, from another direction, the connections between the structures of the computer and the human mind.

In a close-parallel-universe, the dawn of the Digital Age occurs similarly to our own, with one fundamental difference—the logic gate is never invented. Computers still have an incredible power to store, retrieve and archive data, but they cannot process logic. Instead they rely on a global network of humans (‘relays’) to whom they send each logic request (a ‘req’). The firms who produce and maintain the world’s computers employ massive numbers of relays to receive, process and respond to each req in order to power the world’s computing.

Freelance relay, Jack, is sitting in the pub with a few friends enjoying the game. His cell vibrates. Picking it up, he has one notification:

At the weekends, and when he’s out of the house, Jack receives reqs on his mobile device. That way he can earn a little extra cash without being constantly tied to his desk.

Jack puts down his pint and picks up his cell. Sliding his finger across the screen, he views the latest message in his req inbox:

Jack is one of over 5 million freelancers employed by Freelays.com I.T. Systems, supporting their network of PCs, workstations and other devices. Freelays’s systems keep track of how many reqs he answers each month and their complexity to calculate his monthly earnings. Jack’s reqs are randomly spot-checked internally to ensure a high level of accuracy, and this also has an impact on his income.

Sitting beside Jack is Susie, who’s game-viewing hasn’t been interrupted by her cell phone. Susie works 9—5 for one of the world’s leading logic processing firms, REQUELS. She’s based at one of their largest facilities in Palo Alto, California.

At REQUELS, logic requests are split into their constituent parts and each processed by the relevant department. Susie works within the Art Department and specializes in downsampling. The end-users who create her reqs are reducing the size of images. Her reqs consist of small collections of pixels, usually in 2-by-2 or 3-by-3 arrangements. She then selects the color she feels is their average and the new pixel color information is returned to the end-user. After a number of months on the job, Susie learnt that by blurring her eyes she was able to find an average color incredibly rapidly and accurately. Her monthly bonuses have been pretty consistent ever since.

The pub erupts in shouts and screams as Man United score their third goal of the game. As Jack jumps to his feet he feels his cell phone vibrate again in his pocket.

Jack quickly responds before sitting down and taking another sip of his pint.

On the television screen, the strikers are still celebrating in front of the crowd as the on-screen score changes from 2-2 to 3-2. 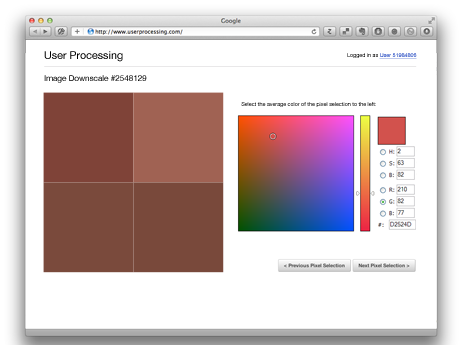 An imagined interface by which a human relay would provide the processing for downsampling images.

This project became the starting point for the final project of the class, Alternative Logic Futures.