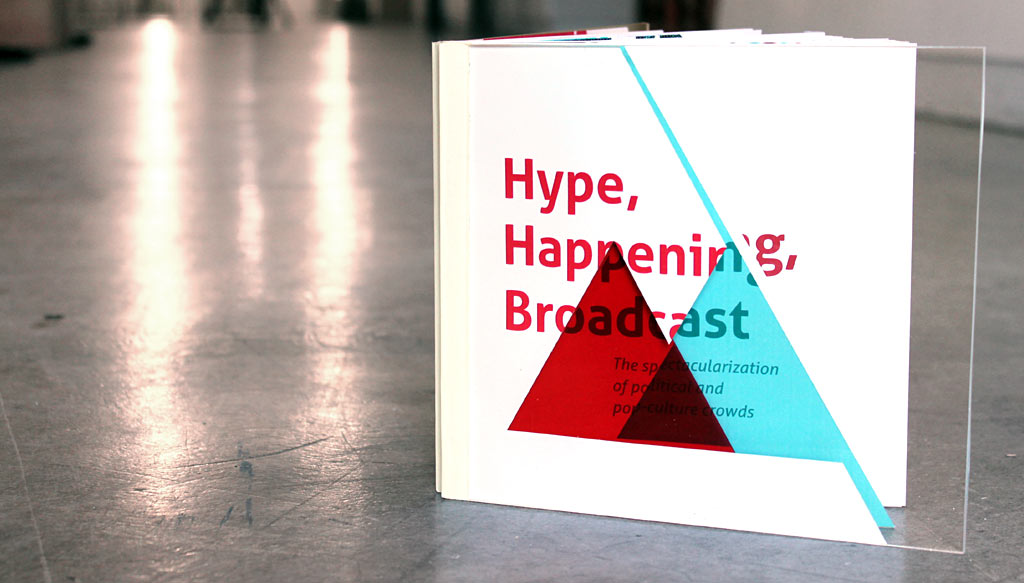 Hypothetical futures of the crowd spectacle

Building on our Public Display: Crowd & Spectacle research, our AMP Studio work culminated in the design and production of a book of our research and speculations.

For this project, we were asked to create some physical output of the initial research we had engaged in, which examined how public spaces and crowd events are now communication spaces.

This project was developed in collaboration with Annie Needham

One of the most interesting items we discovered in our initial research phase appeared in just one small graph. The graph plotted Google searches for “Occupy Wall St” against Google News coverage for the same keywords. We noticed that the searches began a significant period before the news coverage. This seemed to be a really rich area for further investigation.

This discovery lead us to develop this diagram of overlapping triangles to represent our thesis: that the events we were exploring had three distinct elements. The Hype that saw a groundswell of interest through social media and word-of-mouth. The actual event itself, or Happening, which in many ways seems the least important of the three. And the Broadcast which was when the Media caught up with the Hype and transmitted the Happening itself to a broader audience.^1^

^1^ Special thanks to Mimi Zeiger for her help with defining these terms.

In looking for some alternative and more concrete data, here tweets containing #OccupyWallSt are graphed against Google searches for ‘Occupy’. 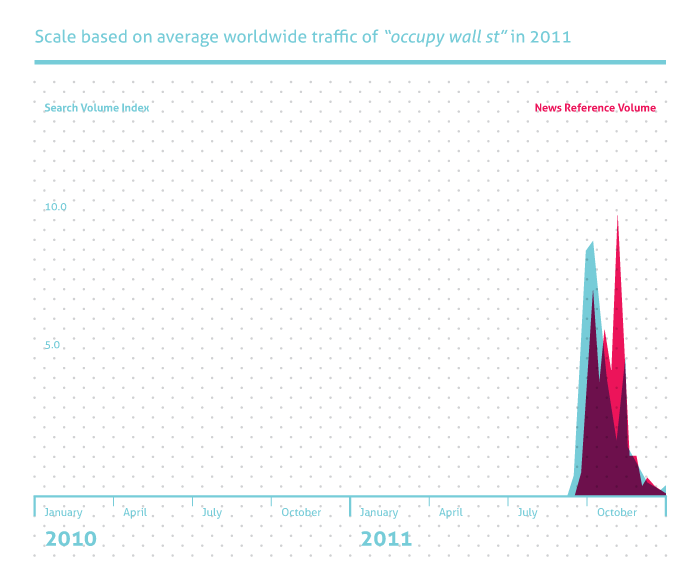 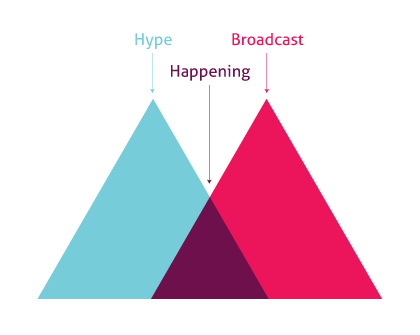 An animated sketch exploring the development of our model

The first part of the book combines aspects of our initial research including a number of the political protest and pop-culture crowd pairings which we had made after observing the eerie similarities between their photo coverage. The book then introduces the Hype, Happening, Broadcast model which emerged from our initial research. 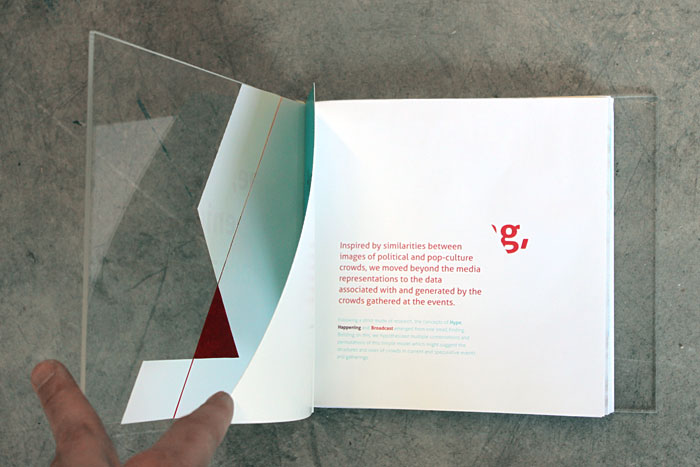 Inspired by similarities between images of political and pop-culture crowds, we moved beyond the media representations to the data associated with and generated by the crowds gathered at the events.

Following a strict mode of research, the concepts of Hype, Happening and Broadcast emerged from one small finding. Building on this, we hypothesized multiple combinations and permutations of this simple model which might suggest the structures and roles of crowds in current and speculative events and gatherings.

If the spectacle is central to garnering attention in today’s media saturated world, what might we learn by comparing significant political protests and crowds from recent years, to the yard-stick of pop-culture assemblies? 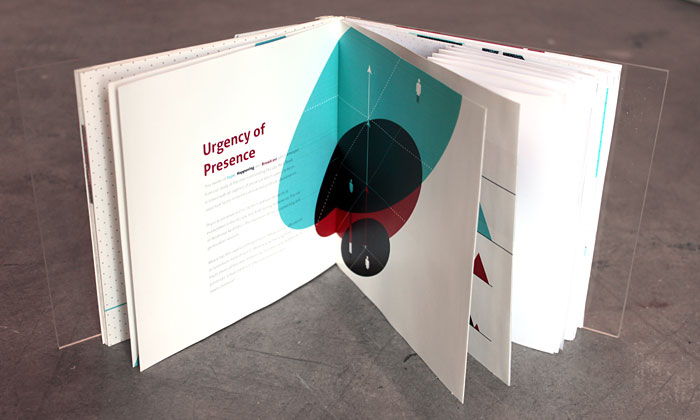 This model of Hype, Happening and Broadcast is linked with an urgency of presence which seems to be an important factor in recent cultural and political phenomenon: physical presence and occupation-without-demands as exemplified in the Occupy and Arab Spring movements; the rise of Relational Aesthetics; the explosion of social networking and geolocation services.

As the diagram/concept of Hype, Happening and Broadcast continues to grow and mutate, what might these projected changes mean for the events, crowds and spectacles of the future? Our visualization becomes instrumentalized; now an interface we push and pull to ground these future speculations. 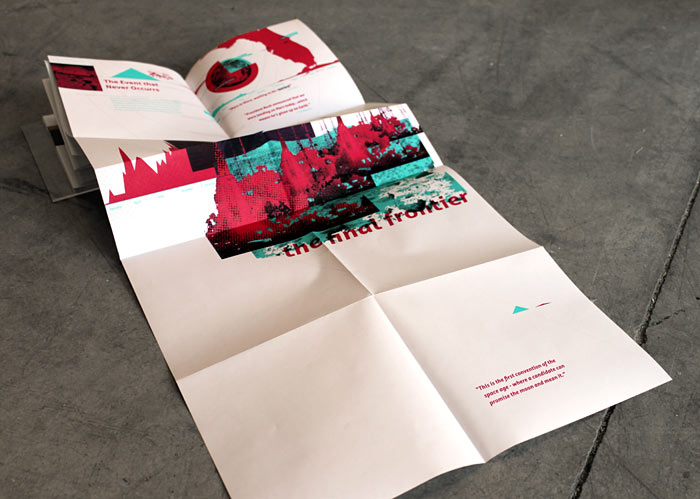 The Event That Never Occurs

As youths we were all promised lives on Mars, the Moon, on giant Space Stations reminiscent of Deep Space Nine. And yet humanity continues to degrade the surface of the third planet. Every space shuttle launches into the depths of milky black with the eyes of the world watching, waiting, anticipating. A spectacle beyond belief, a spectacle gathering at an event that will never happen.

The Broadcast of Past Remembrances

As the world population grows, education relies primarily on the replaying of events that hold cultural and historical value. Though the arenas are empty, the town square is long forgotten, and the society is so far removed from the event itself—the spectacle remains, and echo of what once was, what is and what will continue to be.

The research we engaged in throughout this project brought together some methodological ideas I’ve been exploring in projects such as Alternative Logic Futures and Biolumanoids. Moving between different modes of research included primary source investigation, diagraming, mapping, graphing, photo-pairing and theorizing through graphic forms.

Having compiled a large body of research during the first half of the project, it was just one small part of a single graph that inspired the remainder of the project. For me, it’s important to learn to recognize these little nuggets of potential within a larger design or research project which can be mined further and may lead to entirely new and richer areas of investigation.