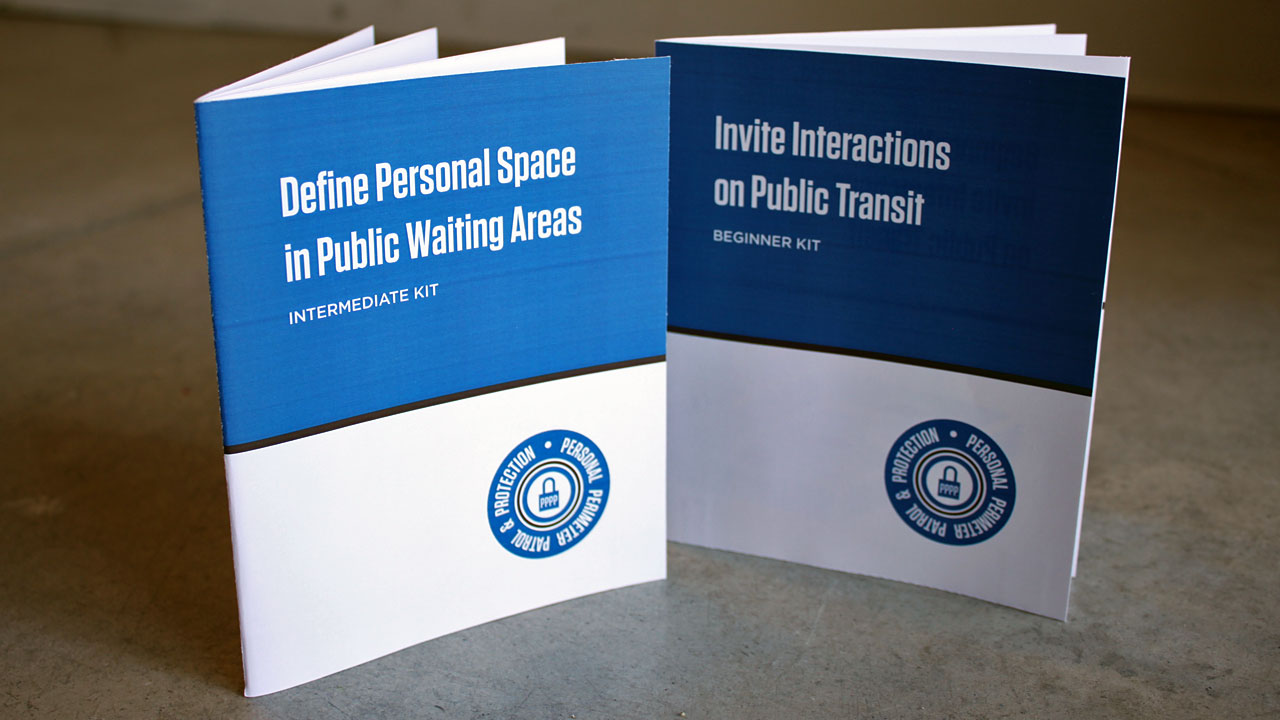 Community Sensing at a Threshold

Investigating transience and waiting at Union Station, we created a design proposal for kits of objects that enable mediation of one’s invisible personal boundaries in shared public spaces.

For this project you will create a design proposal for a communication space at a threshold. This project is designed to introduce you to the concept of gaining inspiration and insight through working directly with a group, community or individual.

To do this you will design the vehicles and opportunities for this group to communicate their aspirations, values, anxieties and assumptions around an issue, interaction, place, expression or experience. You will create ‘probes’ and interventions that explore and elicit responses from your chosen site.

The results will be used to inform a design proposal which will be presented at the class final.

The threshold we chose to explore for this project was Union Station, specifically the waiting area in the main concourse.

We started our investigation by mapping the space in a variety of ways. We monitored where people were sitting; what they were doing while they waited; the use of the space; the light, temperature and noise levels in the space; and how people moved through the space.

We interviewed people who were in the space to see how long they’d been there, what they were doing and why they chose to sit where they were sitting. As well as face to face interviews, we also used questionnaires that inquired about where people were going to and coming from, what they had brought with them, and how the station made them feel.

Initially we thought that this research might inform some system of mapping or a guide identifying optimum locations for certain activities for those waiting in the space. 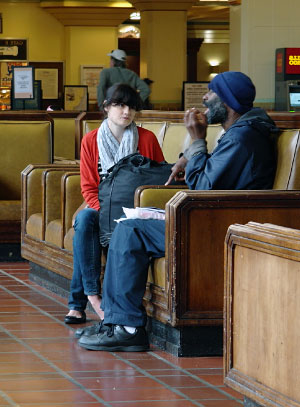 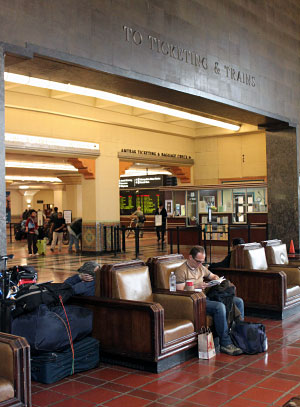 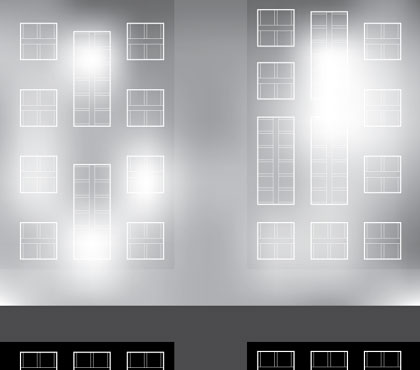 Union Station’s main concourse is a popular tourist destination. A large number of people come there to see and photograph the space. We thought these might be people we could initiate a conversation with, so we quickly iterated some ideas around creating photo spots, where people could find the best vantage points. It wasn’t hugely successful, but we did learn that in order to get people to engage with the spots we had to be more performative in our involvement. 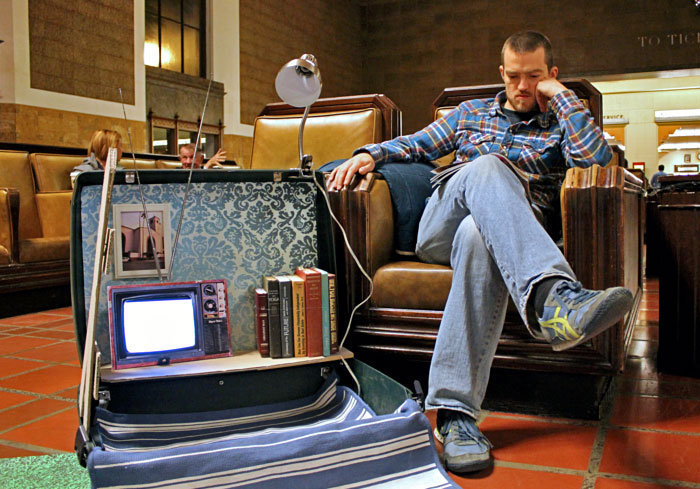 This lead to the development of a performance that played with the idea of a traveller who lives out of his suitcase, and the ways in which the waiting room inhabitants demarcate their space with their luggage as they “make themselves at home” in the space. We explored the impact of setting it up in different locations.

During our time spent there we noticed how people would come in, lay down their bags and setup boundaries around themselves. We began to take note of these social cues, methods of demarcation and other unspoken rules of the space. Another example was the expectation that once you sat down you didn’t engage in conversation. We were interested by the rules of the space and the systems that define personal boundaries and invisible perimeters. We wanted to use the scene-in-a-suitcase to play on the rules and expectations of the space.

In further iterations, we added more details and complexity to the suitcase scene to increase the playfulness and delight that passers-by were engaging with. We added a small library of books, a small tv which played a video about how to initiate conversations.

We also discovered that the act of unfolding and setting up the scene was a huge part of the spectacle, so we integrated this as part of the performance.

Through these refinements, we were able to engage people in lengthy conversations and had a lot of very positive interactions. 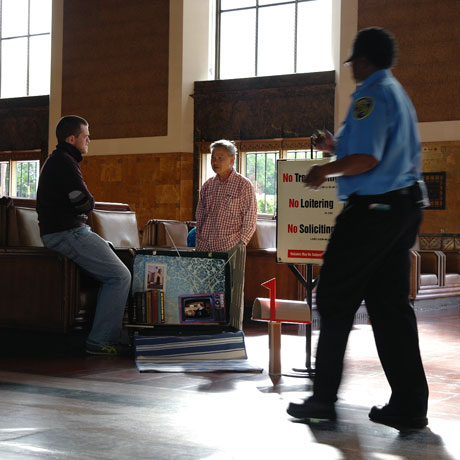 Following our initial investigations and interventions in Union Station, we were intrigued by this idea of meditating personal boundaries in this space and others like it.

What defines a personal or a private space? How do people demarcate their personal perimeters?

There’s a shared language of social signals that indicate the boundaries of public and private space that we all know and use regularly, but are primarily subconscious. We wanted to create a means of visualizing these invisible signals that people give; to play with and emphasize the grammar of this language as a means of exposing it and encouraging a wider conversation about it.

It was this that lead to our design proposal. We designed two kits, the first in a series, that can be used to mediate private boundaries in shared public spaces. One focusses on maintaining your personal space in public waiting areas; the other to aid conversation with strangers on public transit.

The PDF guides for both are available to download to see details of various tools and devices in each kit. 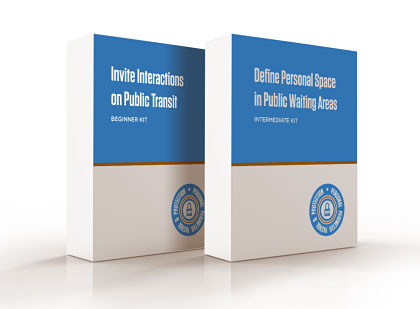 View PDFs of the instructional guides we created for the two kits:

To take this further, it would be nice to pilot some of these prototypes and maybe advertise our products in the spaces we’re aiming them for. The project is nearly more about the availability of these items as a conversation starter than the actual availability of the objects themselves.

We had also discussed expert kits that would be incredibly specific; designed for a very specific scenario and a very specific action or activity. Public transit systems in themselves are so different from city to city, how might our range of kits be localized for each?

What other invisible boundaries could be crossed through the introduction of designed objects? What objects might be designed and introduced to places of long standing division, perhaps places of conflict? How might they encourage dialogue between divided groups?

For me this project also commented on how privacy and ownership of space are not just priorities for people in public spaces, but are in fact commodities within our Western culture. They give people a sense of self, a sense of power and control. When you start to examine this and expose it to people what sort of conversations might that initiate? What is public space and who or what does it serve?